The definition of Adaptive Reuse is the process of reusing an existing building for a purpose other than which it was originally built or designed for. Adaptive reuse of buildings can be an attractive alternative to new construction in terms of sustainability and a circular economy, but can come along with many challenges. In this SCGMA Case Study, we look at how solving those challenges led to a remarkable transformation of an iconic project in Pasadena California.

The 101 South Marengo project was built in 1974 as a data processing center for Bank of America. Designed by famed architect Edward Durell Stone, a 20th-century architectural pioneer behind many high-profile projects including the John F. Kennedy Center for Performing Arts in Washington DC. The five-story 320,000 square foot building stood for decades as a monolithic travertine-clad cube with virtually no windows, and in need of a new design. 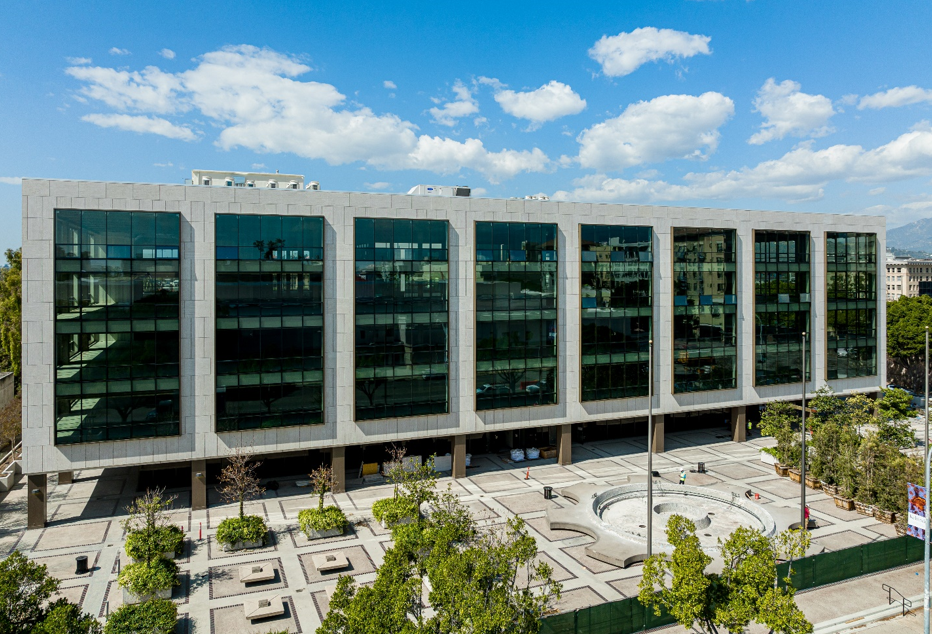 The new design function of 101 South Marengo was to provide a multi-tenant office building with an array of contemporary features that would attract tenants. The solution was to remove much of the travertine, replacing it with curtain walls and GFRC. In addition, the project added a new courtyard in the core of the structure and a fitness facility, while maintaining large open floor plates.

Following initial budget pricing rounds, Aragon Construction was brought on the team to assess the design and to provide input on potential value savings. Working with Atlas Capital, DPR Construction, and RCH Studios, Aragon provided Design-Assist services for the façade.

The vision for the design involved tearing away much of the travertine façade and adding back Glass Fiber Reinforced Concrete (GFRC) with projecting sections of glazed curtain walls. “We don’t want to strip this and put a glass skin on this like it’s every other building,” said the re-design architect Mark Rios. “If we do that, we’ll lose every sense of its place, its position.” Large expanses of window wall and curtain wall were also added to the courtyard, along with operable windows for cross-ventilation. 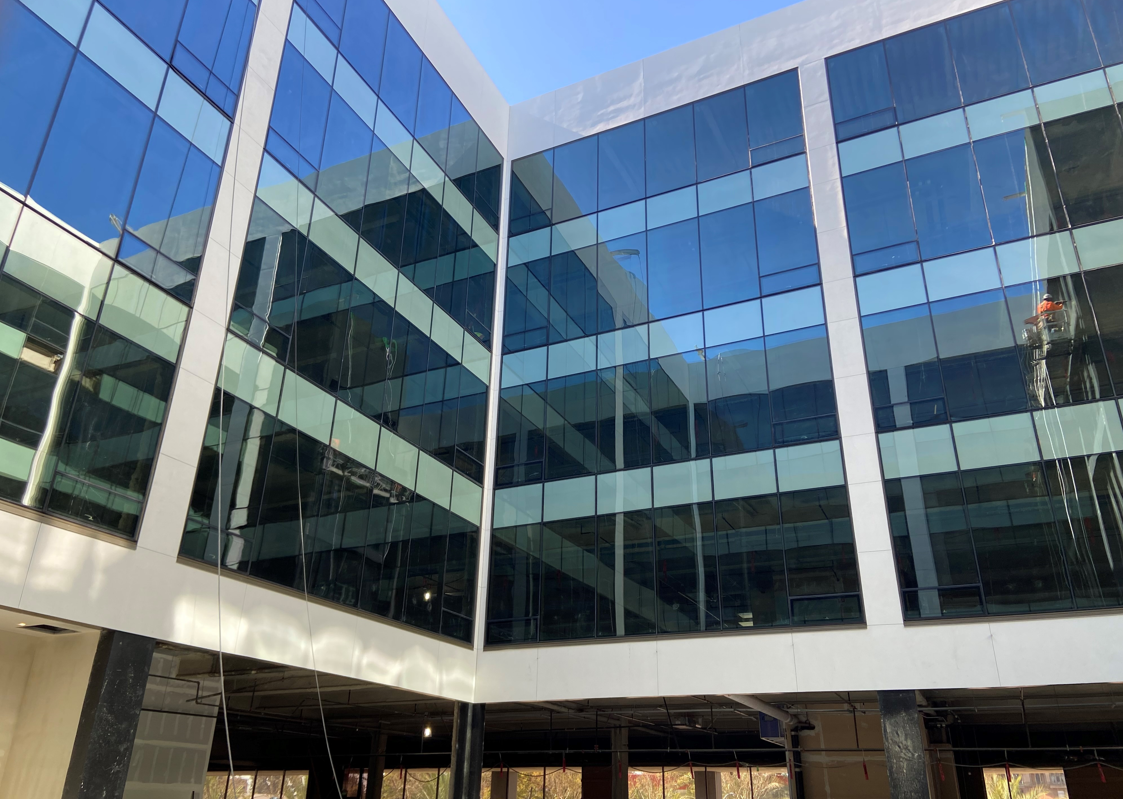 As with any Adaptive Reuse, attachment to the existing structure is always a concern. In addition, an important feature of the exterior design was to have the glazed curtain wall plane project out past the new GFRC by 10”. For this condition, Aragon designed custom steel slab extensions and anchors to allow the curtain wall to cantilever off the structure and remain self-suspended beyond the framed/GFRC façade. 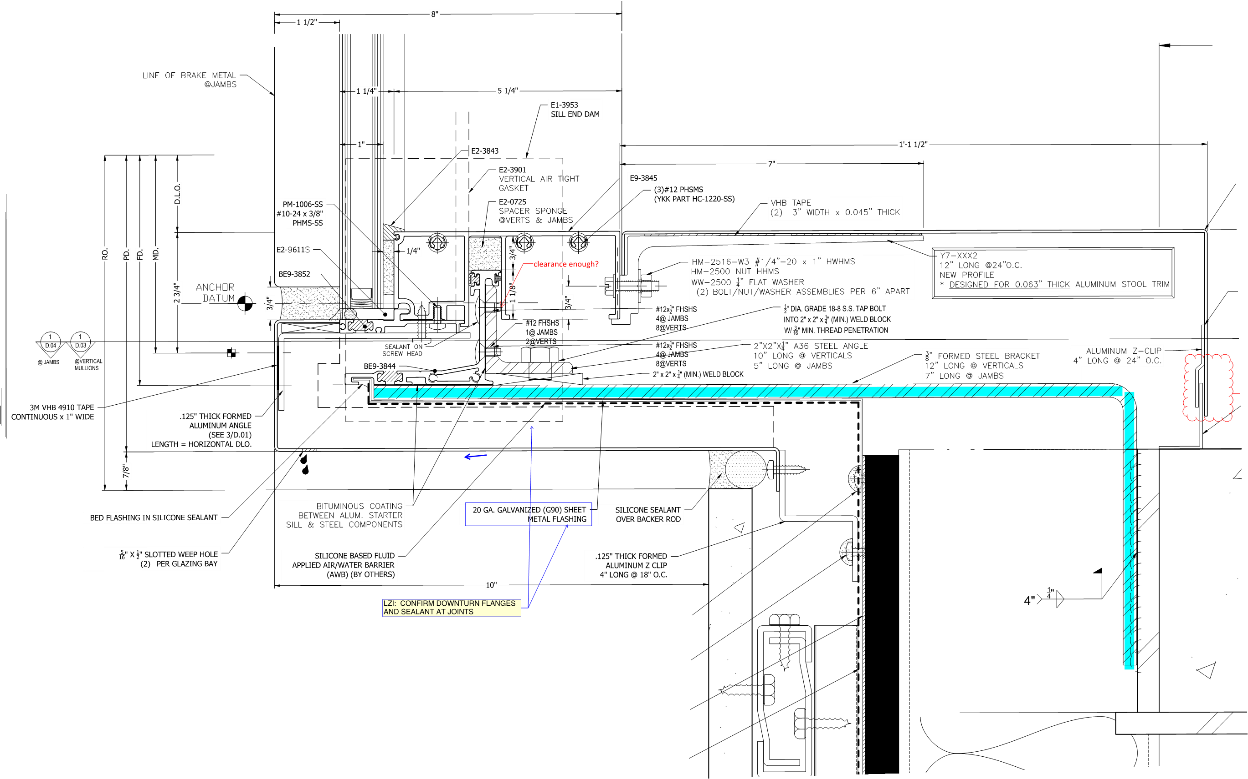 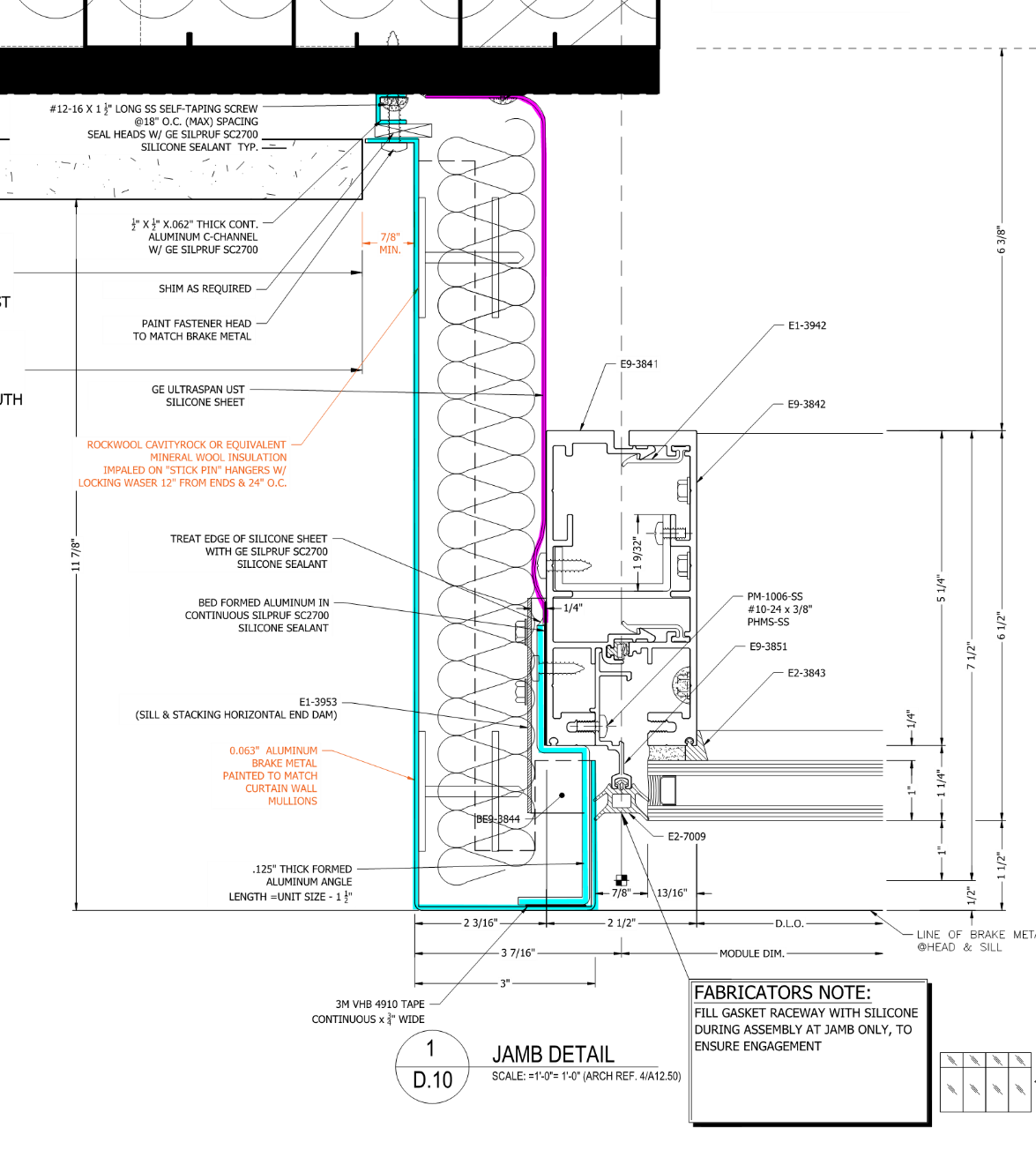 For the perimeter cladding, Aragon had to allow the formed aluminum to be split at each stacking horizontal to allow for the live load deflection. Due to the GFRC sequencing, it was imperative that the waterproofing was installed first, followed by GFRC, and finally the aluminum closures. 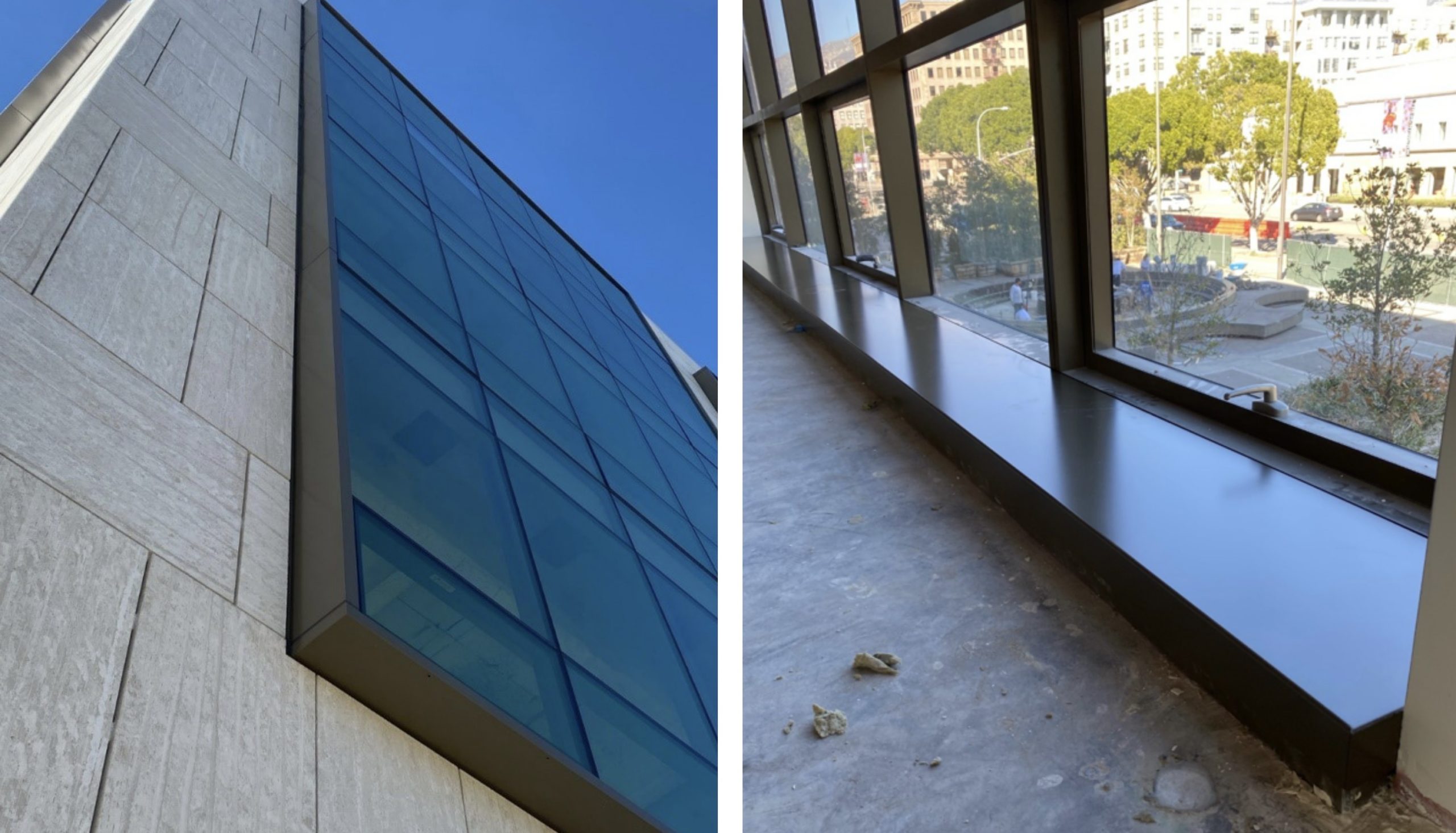 The Architect was passionate about keeping the operable windows throughout the project and leaving them down at the sill condition of each floor, which is unfortunately below the allowable ADA height. This required the Aragon team to find and install low-energy window operators that could be switch controlled at the point of use, all while maintaining this feature within the owner’s budget.

Schedule is always an important issue. In the case of the 101 South Marengo project, Atlas Capital and DPR Construction had an original schedule requiring the first curtain wall unit installation to occur 6 months after the approval and release of shop drawings. Once the project got underway, it was the desire of the team to accelerate that plan. Aragon met the challenge and was able to produce shop drawings and structural calculations for the project within 5 weeks.

Aragon continued to have frequent conversations with Atlas and DPR about procurement timelines. With those discussions and adequate risk assessments, Aragon was able to fast-track the material orders from preliminary details and preliminary calculations. Further, by setting up a “pop-up” assembly facility, Aragon was able to produce the first batch of curtain wall units within 6 weeks of the beginning of fabrication. This allowed Aragon to accelerate fabrication to keep pace with the project schedule.

“Aragon Construction was an essential collaborator on the 101 S Marengo Avenue renovation project team. Their swift technical support and openness to multiple evolving design objectives were key to the success of the new building facades. They were great partners to have on the project from design through construction and I look forward to working with them again.” commented Nicholas Paradowski, Senior Project Director with Rios.

“On a typical new construction project, the schedule typically allows for months of design, engineering, logistics planning, and fabrication while the building structure is being built; that just isn’t the case with adaptive reuse”, said Matt Aragon, Director of Preconstruction. “Accelerating the preconstruction activities strained our vendors and team and gave little float to an inherently schedule sensitive project. If we had this project to do over again, we would have communicated longer durations to the client and shown them how allowing the up-front time to plan pays dividends in the installation schedule.”

“Also, The SSG nature of the curtain wall units required quite a bit of floor space, not just for the assembly process but also cure time. This needs to be considered when reviewing the project delivery schedule and jobsite conditions; if the schedule slips and there is no storage room on site for the panels then you will be looking for storage space which adds considerable cost to the project. Again, clearly communicating this and setting delivery expectations for all parties early in the planning cycle is the key to success.”

SCGMA represents a large variety of glazing firms with decades of experience and special talents for finding solutions on the most complex projects. Contact SCGMA to see how our members could provide assistance on your project.

Click here to view the Case Study as a PDF.

The Employee Retention Credit  (ERC), is a fully refundable tax credit for a percentage of the qualified wages paid to employees. It’s applied to an employer’s federal payroll tax liability and any excess credit is refundable. It was created in…

The Finishing Trades Institute of Southern California, in collaboration with the American Institute of Architects (AIA), hosted its first Glass & Glazing Forum on April 14, 2022, at the new Apprenticeship Training Center in Commerce. The forum offered architects the…

The performance of the exterior façade not only depends upon the systems, but also the ability of the systems to accommodate movement of the structure and still perform. In addition, it is the responsibility of all façade contractors to coordinate…