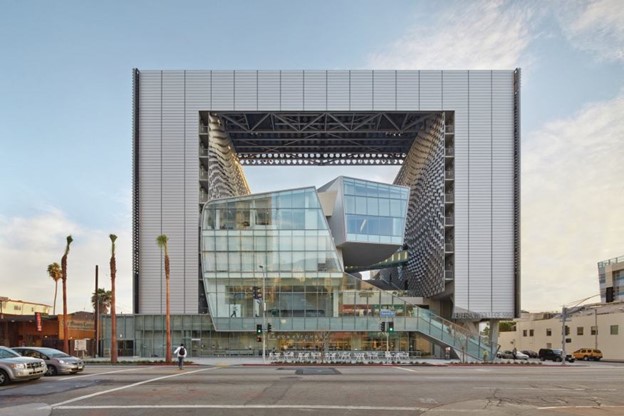 Dynamic facades, ones that not only provide for the high-performance enclosure of a building but through innovative design react to the environmental demands, are part of the continuing evolution of modern architecture. In this SCGMA Case Study, we look at a complex façade and how the integration of operable sunshades enhanced energy performance as well as greater occupant comfort.

Designed by Morphosis Architects, the Emerson College LA Campus is a 10 story, 107,000 square foot academic and housing project on Sunset Boulevard in Hollywood. The $110 million facility brings student interns to LA each year to work in the media and film industries. The building incorporates 188 student dormitory rooms for 217 students with 4 faculty apartments, as well as classrooms, video/film production labs, screening rooms, offices, a fitness center, café, retail, and 3 levels of below grade parking.

The two residential towers present unique façades to the east and west, as an automated system controls the horizontal sunshades based upon the temperature and angle of the sun. Behind the sunshades, a high-performance glass curtain wall features operable windows in the dorm rooms for natural ventilation. At the inner side of the student residences and common areas, a metal panel scrim curves along to provide further shading and also to conceal plaster walls for the housing entries.

The space between the towers and the connecting roof structure provides the feeling of being on stage. The classrooms and teaching facilities intertwine at the center within the open space and create terraces that promote a social environment. These structures are unpredictable in shape, creating an appealing composition of curves, angles, and inverted sloping walls. Walls are clad in rainscreen aluminum panels, while curtain walls maximize vision area with high span stick framed openings and irregular glass shapes.

From Design-Development, the Hathaway Dinwiddie/Morphosis team chose Design-Assist as a delivery method for the façade systems. After receiving pricing and interviewing exterior wall contractors, Walters & Wolf was selected to provide the curtain walls, storefronts, glass guardrails, and operable louvers while Zahner was chosen for the articulated panel system, intricate metal scrim, and other louvers.

“The geometry of the academic area curtain walls required close coordination with the Zahner panel wall at the perimeter,” said Walters & Wolf Project Manager Rodrigo Morales. Dimensional control was established by the architect. “Separation by sealant joint was used typically to simplify the interphase and transitions, allowing the different systems to move independently.” Framing systems for the academic area were shop fabricated, then packaged and shipped to the site for field assembly.

“The typical tower curtain walls were twin span units with 10’-0” floor to floor heights, attached to the structure via aluminum anchor clips and embedded channels. The operable sunshade attachment was designed to anchor directly to the curtain wall to avoid penetrations for the attachment to the structure, though electrical penetrations were necessary for the ultimate power to the system. The curtain wall was designed to take the loads transmitted under the different sunshade positions,” said Morales. Operable windows were shop installed into the unitized curtain wall panels and set as complete glazed units.

The operation of the horizontal blades was tied to the building management system and provided optimum shading based upon the time of day. The sunshade blades are mounted on pivots that are actuated by a lever arm (noted as 14) and attached to the motor shaft. The electrical portion of the operable sunshades required compliance with NEC for LA Building Department approval. The system wasn’t UL Listed as an assembly when fabricated, but compliance was obtained during installation through on-site modifications. 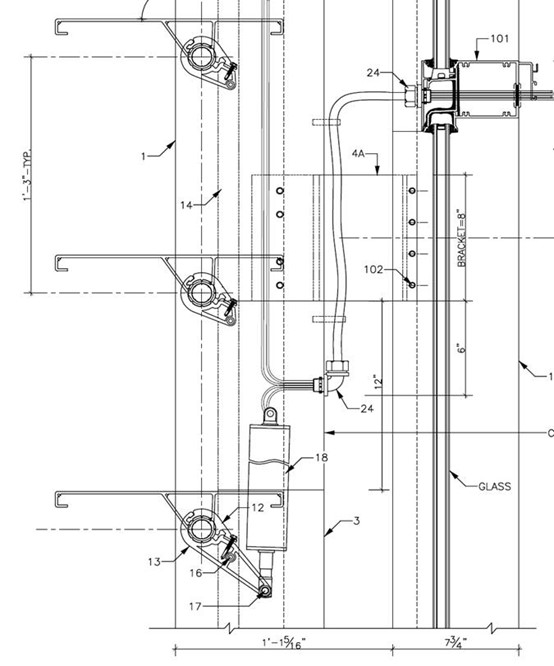 In order to meet the construction schedule requirements, all products other than the main entry stair glass guardrail were prefabricated based upon agreed construction tolerances.

“The installation of the unitized curtain wall followed by the sunshade was critical due to the amount of work it represented. Interior finishes followed directly behind the curtain wall. The initial plan was to use mast climbers to install the sunshades, but eventually, the installation was done with swing stages after the mast climber rental company failed to provide the adequate equipment,” said Morales.

In regards to what worked well, the consensus is that the curtain wall installation with the shop installed operable windows, along with dimensional coordination to produce metal and glass for the academic walls had few complications. In regards to what could have worked better, in hindsight, the approval process of the operable sunshade system would be notable.

From Walters & Wolf’s perspective, “We learned a great deal of what and what not to do regarding the operable sunshade system procurement and approval,” said Morales. In the end, we believe that the anticipated project goals were met.

As stated by the exterior wall consultant (Jon Weir, JA Weir Associates), “This was a complex façade project that went together seamlessly, due to an architectural firm that was willing to sit down and roll up their sleeves anytime that it was needed, and a highly skilled group of contractors who collaborated as well as anyone on the design team could ask.”

SCGMA represents a large variety of glazing firms with decades of experience and special talents for finding solutions on the most complex projects. Contact SCGMA to see how our members could provide assistance on your project.

Click here to view the case study as a PDF.

Please join us in attending our upcoming Annual General Membership Meeting. Date: Thursday, August 19, 2021 Time: 7:00 am – 7:25 am PST Location: via Zoom The tentative agenda for this meeting will include: Man Hours Trust Fund Reports H&W…

Part of the day to day work of the IUPAT includes building relationships with like minded organizations within the industries that we represent. These relationships can serve a number of purposes, but are primarily focused on raising the standards within…

Tim Bormann Presents SCGMA’s Supervisor/Foreman Jobsite Safety Awareness Workshop   Thank you for joining us in learning more about the responsibilities of jobsite safety and awareness.   Topics covered during this program included: -Health and safety responsibilities at the…

The use of standard framing systems in the glazing business is quite common, but when designers use those systems in unconventional ways to create visual interest in their buildings, it can also provide some installation challenges. In this…

SCGMA is pleased to announce that Dean George, a specialist in the commercial glass and new construction industry, is the presenter for our upcoming virtual course, Blueprint Reading.   Course Description  Join us to learn more or refresh your knowledge…